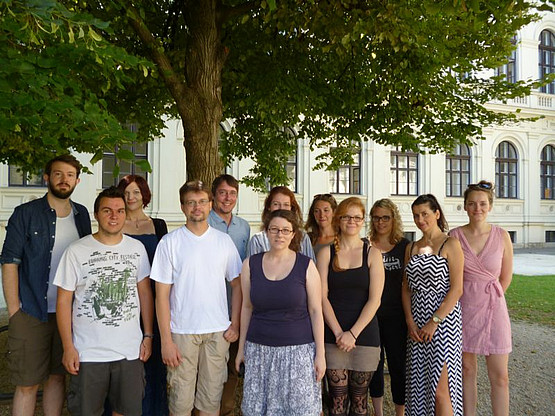 The second PELP Summerschool took place from the 21 to 24 of June 2015  in Graz. Held as a block seminar, the event addressed issues of poverty, migration and pluralistic societies. Each topic was covered in the course of a one-day-intensive workshop in which relevant positions and questions were discussed in depth. The seminar, which was organized by Dirk Brantl (University of Graz) and Amelie Stuart (University of Graz), was conducted in collaboration with lecturers from the Eberhard Karls University in Tübingen, Germany.

On day one, lecturers and students addressed the political challenge underlying all of the topics discussed: the fact that poverty and migration raise political as well as ethical questions that cannot be solved by individual nation-states. In order to face these issues, a number of transnational approaches have been implemented, all of which challenge the idea of national sovereignty to a greater or lesser extent. The first day of the event, chaired by Dirk Brantl, was dedicated to theoretical conceptions of transnational sovereignty, which are also at the centre of philosophical approaches to global poverty and migration.

Day two followed closely with an examination of societal pluralism, which constitutes an integral component of the identity and self-conception of modern, democratically governed nation-states. Under the direction of Moritz Hildt (Tübingen) participants discussed fundamental questions such as: What are the consequences of pluralism for the justification of principles of justice? If we proceed on the assumption that within a pluralistic society there are many different belief systems, does this not mean that we have to find ways to justify principles of justice so that they are equally plausible and acceptable to everyone, no matter their belief system? How can we find principles of justice that meet these requirements? And how can we deal with belief systems that cannot, or will not, accept these principles?

Amelie Stuart chaired the third day of the event, which addressed the normative challenges of global poverty. Besides different models of responsibility, the following questions were primarily discussed and analysed: What are the duties of nation-states and their citizens, respectively, towards people beyond their borders? Do nation-states and citizens have different duties towards citizens of other nation-states? What substance and scope do these duties have?

The Summerschool concluded with a discussion chaired by Karoline Reinhardt (Tübingen) about one of the consequences of global poverty, namely the moral and political challenges raised by global migration. The current relevance of normative political questions raised by migration movements was not just attributed to recent political debates. Rather, fundamental questions regarding the possibility of justifying immigration and naturalization policy were discussed. By examining egalitarian-cosmopolitan and communitarian authors, the participants approached the current debate around migration from a perspective of political philosophy and critically discussed central works within this debate.